A Belfast woman is leading a diving expedition in the Florida Keys which hopes to unravel the mystery of why a Civil War ship sank in the area.
The paddle steamer the Menemon Sanford was carrying Union soldiers bound for New Orleans when it hit a coral reef near Key Largo.
There were suspicions the sinking was as a result of sabotage.
University of Ulster graduate Anne Corscadden Knox will lead American students in investigating the wreck.
Anne, who is originally from west Belfast, said: “We hope that our investigations can shed some light on the sinking.
“Sometimes you can put it all together and come up with some good theory, but it’s like anything in archaeology, you’ll never be 100% certain.”
All of the crew and soldiers from the 156th New York Volunteers were moved to US naval vessels before the boat sank, but the soldiers’ gear and supplies were lost.
There were suspicions that the ship’s pilot Captain A W Richardson was a southern sympathiser and that the sinking was an act of sabotage. Richardson was placed under arrest for criminal negligence.
The diving expedition is just one of several projects Anne has undertaken as a research associate and programme co-ordinator with the PAST Foundation.
A qualified commercial diver, she has also taken part in an underwater expedition to investigate what is believed to be the wreck of the Queen Anne’s Revenge, flagship of the notorious pirate, Blackbeard.
“Whether it is that ship or not, it was a remarkable 18th century shipwreck with quite substantial archaeological debris,” she said. 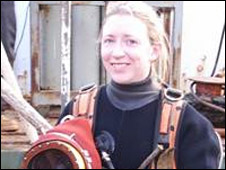