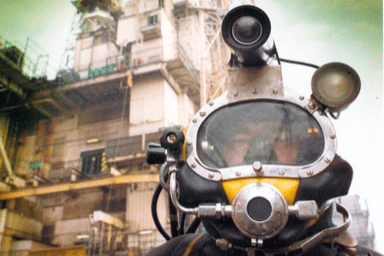 Dominic wrote in and shared his amazing uncle’s story about how he got started as a commercial diver. Sadly, his uncle Brian passes away last year. We are happy to post his adventure of his very first commercial diving job!
Thank you so much for sharing, Dominic!

Many East End family members worked in the Docks at one time or the other. In fact, it was a short stint of a couple days work in the docks that would be instrumental in starting me on a journey that would take me away from the UK for most of my adult life

After finishing Art college, I lived and worked in the West End of London as a commercial design artist. By my mid-twenties, however, I was spending more and more time in the numerous clubs, both in the West End and the East End This environment was not really contusive to my future and I was becoming increasingly restless.

I heard they were looking for experienced divers for two/three days in the London Docks. As the money offered was good, and having had some experience in sports Scuba diving, I duly presented myself as an ‘experienced’ commercial diver. The job was to recover coils of copper wire that had been dropped overboard while the ship was being unloaded. The urgency was great because it was preventing other vessels tying up to the quay.
I did get the job. But needless to say, my exaggeration of being ‘experienced’ was soon discovered as soon as they started to dress me in the traditional diving suit, that consisted of a heavy canvas and rubber suit. And even heavier bronze helmet and lead soild boot. So heavy that I couldn’t even stand up

Nevertheless, they persisted and finally did get me in the water. Not knowing how to compensate the pressure inside the suit, immediately floated to the surface. !!

Eventually, I made it to the bottom, which was about 40 feet deep. Six foot of that being thick black mud, in which Ihad to scramble about in, to find the missing copper coils. Once discovered, all I had to do was hook them on to a crane.

Simple. But first I couldn’t see a thing. Second I couldn’t handle the diving suit correctly and air would get air into the legs and turn my upside down.

When I finally did find a coil and managed to hook it onto the crane, many times I discovered that I was also attached and going up and down with the load. I won’t go into the third, fourth, fifth and sixth forms humility that I suffered

Example of diving condition taken from Path News
Going Down: This video has no sound
http://www.britishpathe.com/…/going-down/query/SouthendonSea

Needless to say, when they finally landed me back on the quay like a beached whale, the Gaffa’ informed me that as I was not as ‘experienced as I had led them to believe. I, therefore, was only going to receive half the pay

However, because I had stuck with and persevered, If I wanted to return the following day, I would receive the full hourly pay, because now I WAS ‘experienced! !! This I did. The start of my Personal Journey
A few months later I answered another add seeking ‘Experienced’ divers Not in the London Docks, but for oilfield work in the Middle East.

As I was now ‘Experienced’ I answered the add, and three weeks later was flying out to Dubai, which would be the start of a career working on most of the Oilfields throughout the world for the next 30 odd years
It’s a decision that I have never regretted. The alternative can never compare to the many experiences that I have enjoyed
Oilfield diving was in its infancy and the transition from normal Civil Engineering Diving required a whole new technology, that I was able to absorb myself in.

Do you have a great story to share?  Tell us below!

DIVER STORY: That was just wrong….