Another week and another huge drop in the Baker Hughes oil-directed drilling rig count. The speed with which the rig count is dropping has encouraged forecasters to translate the decline into an immediate fall in oil output. The focus of analysts has been on the oil rig decline since the world is absorbed with determining when either Saudi Arabia cuts its production to boost global oil prices from current levels or the American shale industry cuts back drilling sufficiently that the natural decline rate of shale wells eliminates the existing oil surplus.

The chart of the count of active oil drilling rigs since the turn of the century shows an almost vertical decline in recent weeks. The angle of this oil rig decline is sharper than occurred in the 2008-2009. On the surface, this picture would support the view of a rapid decline in new oil production. Below the surface there may be some variances in the pace of decline of the various drilling rig types that could moderate the optimism of a quick production reaction. 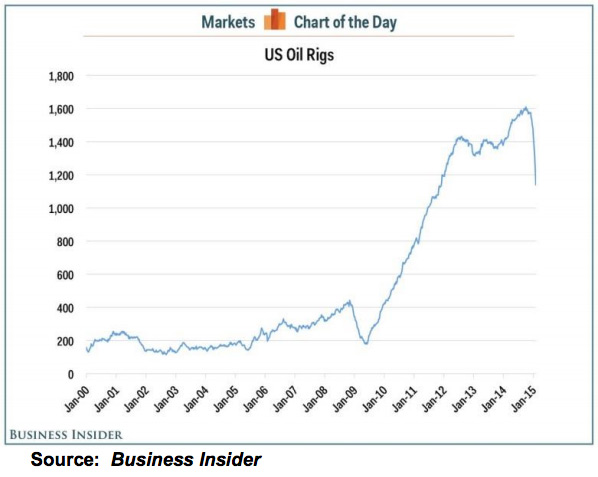 In Exhibit 21 we plotted the change in the weekly rig count since Thanksgiving by whether the rigs were drilling directional, horizontal or vertical wells. In the first couple of weeks, there seemed to be little or no reaction to the start of the collapse of oil prices following the Thanksgiving Day meeting of the Organization of Petroleum Exporting Countries (OPEC) at which the members agreed to sustain the organization’s 30-million-barrel a day production level. The announcement of that decision caused one of the largest one-day drops in global oil prices and started the industry on the slide into its current recession.

When the rig count started to reflect decisions by producers in response to the fall in oil prices, we see all types of rigs shutting down, although directional weeks seemed to be leading the pace. Slowly the pace of decline of rigs drilling vertical wells accelerated. Finally, the rigs drilling horizontal wells started falling rapidly, although there were certainly more of them at work initially. 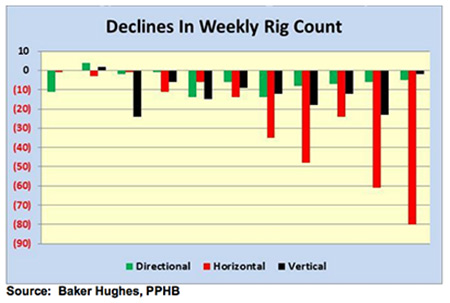 Between November 26, 2014, and last week, the industry lost rigs drilling 59 directional wells, 283 horizontal wells and 119 vertical wells. On a percentage basis, the declines were 30.4%, 20.6% and 33.8%, respectively. What we take away from these figures is that we are on the cusp of the decline in oil production growth. Vertical rigs are often used to deep the top section of horizontal wells with the main portion drilled by larger rigs (horizontal). Efforts to improve drilling efficiencies and lower well costs have led to this rig specialization. The recent pattern in the rig declines suggests that pad drilling is only beginning to be impacted, which is good news for the optimists who believe this will be a short industry downturn.

So far, the industry has laid down 461 rigs since Thanksgiving Day week. Oil rigs will continue to fall until the industry has shut down enough rigs to truly impact oil production growth, and unfortunately that may take a while. We would not be surprised to see another 300+ rigs shut down before production starts to slow. We will continue to watch the nature of the wells being drilled. We also need to examine where the rigs are falling to further gauge how fast oil production may fall and oil prices respond.