Commercial divers doing underwater construction or salvage often use a diving bell for transportation to the underwater site. Use of a diving bell (also known as a Personal Transfer Capsule, PTC) and a pressure chamber extends the amount of time a diver can safely stay underwater. Diving bells were known as early as the fourth century B.C. , when they were observed by the ancient Greek philosopher Aristotle. More sophisticated diving bells were devised in the seventeenth century. Modern bells for commercial diving were developed after World War II, with the rise of the offshore oil industry.

Commercial diving (diving for pay) is divided into two main types, surface-oriented diving and saturation diving. In surface-orientated diving, divers in helmets work underwater, connected to a breathing apparatus on shore or on board a ship, barge, or platform. Typically divers work in pairs, one underwater and one at the surface tending the hoses and equipment. Surface-oriented divers can work safely at depths up to 300 ft (91.5 m), but divers can only spend a limited amount of time underwater. The effects of water pressure can lead to decompression sickness. Under pressure, nitrogen collects in the diver’s body tissue, blocking the arteries and veins. If the diver rises too quickly, the nitrogen forms bubbles in the tissue, something like the way a soda bottle bubbles when uncapped. Gas bubbles in the tissue cause pain, paralysis, or death. After a deep dive, the diver needs to decompress gradually, returning very slowly to the surface pressure in order to avoid decompression sickness. Decompression time is related to the depth of the dive and the duration. With a deep dive of only one hour, decompression time can take days. Surface-oriented diving is only practical for small jobs.

The second type of commercial diving, saturation diving, is more useful for large-scale construction projects. In saturation diving, divers use a pressurized chamber, sometimes known as a Deep Diving System (DDS), attached to a diving bell. The chamber and bell begin on board a ship. A team of divers boards the chamber, which is then mechanically pressurized to simulate the environment at the depth of the planned dive. The chamber is a complete living environment—equipped with beds, shower, and furniture—and able accommodate a team of divers for weeks. When the divers are acclimated, they exit the chamber through a mating tunnel and enter the diving bell, which is also pressurized. A crane lifts the bell off the ship and drops it to the underwater site. Once at the site, one diver exits the bell in a diving suit and helmet and begins working. The other diver remains in the bell and tends the first diver’s hoses and equipment. After an interval of perhaps two hours, they switch. Working from a bell, the divers may put in an eight-hour day underwater. Then they are ferried to the surface in the bell, enter the pressure chamber, and switch with the next shift of divers. When the entire job is completed, the team decompresses in the pressure chamber. Though they have submerged multiple times the team only needs to decompress once.

A bucket or barrel lowered straight into the water, open end down, will trap air inside it. Aristotle wrote of divers using air-filled cauldrons to breathe underwater. Alexander the Great was said to have gone to sea in a diving bell—reputed to be a barrel of white glass—in 332 B.C. He was said to have stayed deep underwater for days, though this is not plausible. There are several references to diving bells in the Middle Ages. In 1531 an Italian, Guglielmo de Lorena, made a workable diving bell that he used to recover sunken ancient Roman ships from the bottom of a lake. Other bells were invented and used in various places in Europe, mostly to salvage treasure. The forerunner of the modern diving bell was invented by Englishman Edmund Halley, who is best known for the comet bearing his name. In 1690 Halley built a diving bell that used leather tubes and lead-lined barrels to supply fresh air underwater. His bell was a wooden, open-ended cone, weighted with lead and fitted with a glass view port. Inside, Halley hung a platform for the diver to rest on, and a contraption of weighted barrels. The barrels were fixed so that when the diver pulled them into the bell, water pressure from below forced them to release fresh air into the bell. Helpers on the surface refilled the barrels with fresh air. Halley and a team of divers managed to stay underwater at a depth of around 60 ft (18.3 m) for as long as an hour and a half using his bell.

Others duplicated Halley’s achievement, but the design was not significantly improved until 1788. In that year, a Scottish engineer, John Smeaton, made a diving bell that used a pump on its roof to force fresh air inside. Smeaton’s bell was used by divers doing underwater bridge repair. A variety of diving equipment was invented in the nineteenth century, leading to workable diving helmets connected by hoses to an air supply on the surface. This equipment tended to be heavy and bulky, made with hundreds of pounds of metal to withstand deep water pressure. Workers on tunnels and bridges went down in huge cast iron bells or elevator-like chambers called caissons. As little was known about the hazards of pressure, many of these workers sickened and died of what was called caisson sickness, now know to be decompression sickness.

The groundwork for future commercial diving was laid after World War II. The Swiss diver Hannes Keller used a diving bell in 1962 to reach a depth of 984 ft (300 m). His bell was at a slightly higher pressure than his dive site. Keller breathed a mixture of helium 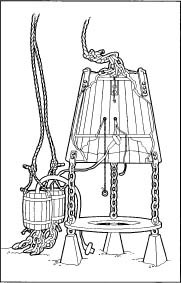 and oxygen through hoses attached to a machine in the bell. He showed that the diving bell could be a valuable way-station for a deep diver, supplying not only breathable gas but also electricity, communication devices, and hot water to heat the diving suit.

Saturation diving was made possible by the work of Dr. George Bond, director of the United States Navy Submarine Medical Center in the mid 1950s. His experiments showed that a diver’s tissue became saturated with nitrogen after a certain time of exposure. After the saturation point was reached, the duration of the dive was unimportant. A diver could remain under pressure for weeks or months. The time needed for decompression would be the same, whether the diver stayed at the saturation point for an hour or a week. Bond’s experiments led to the development of Deep Diving Systems. These were used frequently by workers in the oil industry in the 1970s and 1980s, when deep offshore oil drilling platforms flourished.

The bathysphere and the
bathyscaph

Two important modern diving bells were the bathysphere and the bathyscaph. These were deep sea diving vessels made for scientific observation. The bathysphere was built by William Beebe, an American zoologist, and engineer Otis Barton in 1930. Beebe, fascinated with underwater life, conceived of the diving machine, and Barton was able to design it. Barton’s idea was to make the chamber perfectly round to evenly distribute the water pressure. It was manufactured from cast steel a little over 1 in (2.5 cm) thick and 4.75 ft (1.5 m) in diameter. The bathysphere weighed an enormous 5,400 lb (2,449 kg), almost too heavy for the available crane to lift. Beebe and Barton made multiple dives off Bermuda in the bathysphere, reaching a depth of 3,000 ft (900 m) in 1932. Due to the great strength of the sphere the divers were protected from pressure, but the bathysphere proved unwieldy and potentially risky. It was abandoned in 1934.

A decade later, a Swiss father and son, Auguste and Jacques Piccard, designed a similar vessel called the bathyscaph. The bathyscaph resisted the effects of pressure, like the bathysphere, with a heavy steel spherical chamber. The chamber hung beneath a large, light, gasoline-filled container. Releasing air valves allowed the bathyscaph to lose buoyancy and sink to the ocean floor under its own power. To come up again, the operators released iron ballast, causing the vessel to slowly rise. The first bathyscaph was built in 1946, but irreparably damaged in 1948. An improved machine descended to 13,000 ft (4,000 m) in 1954. The Piccards built another bathyscaph, named the Trieste, in 1953. The United States Navy bought the Trieste in 1958. Jacques and Navy lieutenant Donald Walsh reached a record depth of 35,810 ft (10,916 m) in the Mariana Trench in the Pacific in 1960.

Modern diving bells are made of high-strength, fine-grain steel. Windows are constructed from cast acrylic of a special grade designed for pressure vessels. The bell also needs an exterior girding made of thick aluminum to protect it from shocks. The bell is painted with a high-grade marine epoxy paint. Steel and aluminum specifications vary depending on the expected depth of the vessel.

Diving bells are custom-built according to customer specifications. The customer approaches the manufacturer with an outline of what is needed. Depending the needs, the outline will specify bell shape, minimum number of occupants, number of windows, and any other special needs, such as racks to hold equipment. The manufacturer looks over the customer’s plan, and then draws up a final design.

The manufacturing and design of diving bells is carried out under specific regulations provided by the American Society of Mechanical Engineers (ASME). ASME has a sub-section regulating what are generally called Pressure Vessels for Human Occupancy, or PVHOs. PVHOs include diving bells as well as submersible vessels, decompression chambers, recompression chambers, high altitude chambers, and others. ASME lays out strict standards for all aspects of diving bells, from the design through fabrication and testing. Manufacturers and their subcontractors must all follow the ASME guidelines step-by-step through the manufacturing process in order to receive an ASME stamp on the finished bell.

Quality control is extremely important for a vessel used for inherently dangerous underwater work. Quality control is built into the diving bell manufacturing process, because manufacturers follow the standards laid down by ASME. Not only is the bell tested after construction, but even the preliminary design has been carried out in a way that satisfies ASME rules. The overall regulatory authority over diving, including 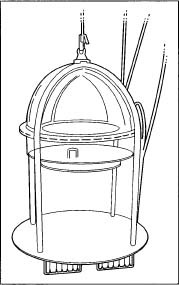 commercial diving, in the United States is the Coast Guard.

The United States Navy also tests various diving equipment for its own use. It runs an Experimental Diving Unit that tests existing equipment and tries out cutting edge diving technology. The Experimental Diving Unit also employs doctors and researchers who investigate the physiological effects of diving. Some of this research may lead to regulations effecting commercial divers. This in turn may effect safety procedures and quality control tests for diving bells and other diving apparatus.

Commercial divers rely on diving bells every day for transportation between a pressurized chamber and a deep sea site. The development of saturation diving led to a much more efficient way of carrying out extensive underwater work, because divers only need to decompress once at the end of the job. Some current research, however, investigates ways to do without decompression altogether. Some researchers have investigated the possibility of equipping divers with artificial gills, allowing them to breathe oxygen directly from water. Another possible new technology is called liquid breathing. At deep pressure, if the lungs are filled with an oxygen-bearing liquid, they can theoretically continue to function. Hypothetically, a scuba diver might be able to breathe oxygenated liquid fluorocarbon from a portable tank. This would enable a diver to dive deeper without the use of a pressure chamber and diving bell. Another avenue of investigation is so-called biologic decompression. A special bacterium in the body could be used to metabolize the gases trapped in tissue that cause decompression sickness. This would eliminate the need for decompression in a chamber. If any of these technologies became viable for commercial divers, the existing system of pressure chamber and diving bell may alter.