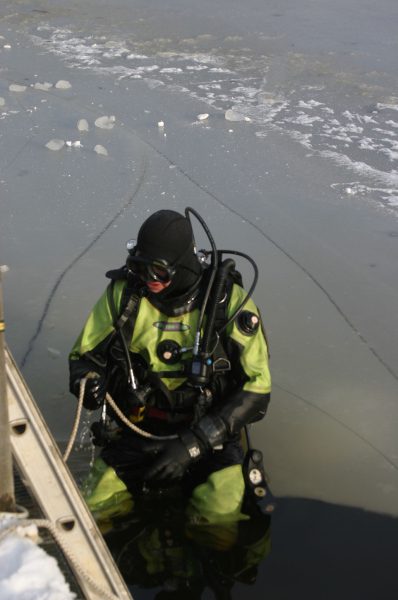 This program – which should span the local, state and federal U.S. government levels – should focus on understanding oil spill behavior in the Arctic marine environment, including the relationship between oil and sea ice formation, transport and fate, according to a report released by the National Research Council (NRC) Wednesday.

“It should include assessment of oil spill response technologies and logistics, improvements to forecasting models and associated data needs, and controlled field releases under realistic conditions for research purposes.”

The projected rise in commercial activity associated with the thinning and retreat of Arctic ice has raised concerns about the risk of oil spills. Recent interest in developing Alaska’s offshore oil and gas resources has led to planning, environmental assessments and preliminary drilling. Greater accessibility to the Arctic region also could result in greater seasonal use of Arctic waters by tankers and bulk carriers, fishing fleets and tourists on cruise ships seeking to interact with the Arctic wilderness.

To address potential oil spills and the range of conditions in the Arctic – from extreme weather and environmental settings, limited infrastructure, vast area and vulnerable species, ecosystems and cultures – the United States needs a full suite of proven oil response tools to address potential oil spills in U.S. Arctic waters. However, not all these tools are readily available.

“While much is known about both oil behavior and response technologies in ice-covered environments, there are areas where additional research would enable more informed decisions about the most effective response strategies for different Arctic spill situations,” according to the report.

NRC recommended that a decision process similar to Net Environmental Benefit Analysis, which compares advantages and disadvantages of response options, should be used to determine which tool offers the greater overall reduction of adverse environment impact.

Research areas that would improve science-based decisions about response technologies include:

Lack of infrastructure in the Arctic presents a significant liability in the case of an oil spill. To address the risk of oil spills, the United States will need to make significant investment in physical infrastructure and human capabilities, from communications and personnel to transportation systems and traffic monitoring, to support oil spill response efforts in U.S. Arctic waters, according to the report.

“Communities are dependent on air and seasonal marine transport for the movement of people, goods and services, and there are few equipment caches with boom, dispersants and in situ burn materials available for the North Slope and Northwest Arctic Boroughs,” said NRC in the report. “It is unlikely that responders could quickly react to an oil spill unless there were improved port and air access, stronger supply chains, and increased capacity to handle equipment, supplies and personnel.”

Placing a suite of response equipment throughout the Arctic, including aerial in situ burn and dispersant capability, would provide immediate access to a number of rapid response oil spill countermeasure options, NRC said.

“Given the proximity of U.S. Arctic waters to international territories, certain factors should be addressed in advance of an actual event, including communications between command centers, coordinated planning, trans-boundary movement of people and equipment, and identification of translators,” NRC noted.

At this time, no funding mechanism exists for the development, deployment and maintenance of temporary and permanent infrastructure. One solution is a funding mechanism for infrastructure development and oil spill response operations is a public-private-municipal partnership to receive a percentage of lease sale revenues, rents, bonuses, or royalty payments that are currently deposited in the federal treasury.

The U.S. Coast Guard, which will need to expand its presence and performance capacity in the Arctic, and the Alaska Department of Environmental Conservation should develop an oil spill training program in order to develop trained response teams in local villages. Industry also should continue its participation in local training initiatives as well.

The Coast Guard will need to bolster its capacity for area-specific training, icebreaking capability, improved availability of vessels for oil spill response and other emergency situations, and aircraft and helicopter support facilities for open water season and, eventually, year-round response.

“Furthermore, Arctic assignments for trained and experienced personnel and tribal liaisons should be of longer duration, to take full advantage of their skills,” NRC said. “Sustained funding will be needed to increase the USCG presence in the Arctic and to strengthen and expand its ongoing Arctic oil spill research programs.”

NRC also recommended that the Coast Guard expand its bilateral agreement with Russia to include Arctic oil spill scenarios and conduct regularly scheduled exercises to establish joint responses under Arctic conditions. The United States also should be on existing bilateral agreements with Russia and Canada to develop and exercise a joint contingency plan.

The National Research Council conducted the study on behalf of the American Petroleum Institute, the U.S. Arctic Research Commission, the Bureau of Safety and Environmental Enforcement (BSEE), the Bureau of Ocean Energy Management, the U.S. Coast Guard, the Marine Mammal Commission, the National Oceanic and Atmospheric Administration and the Oil Spill Recovery Institute.

The organizations asked the National Research Council to examine the current state of science and engineering for oil spill response and environmental assessment, with a focus on the potential impact on U.S. waters in the Bering Sea and the Beaufort and Chukchi seas.

Industry, academic, government, non-governmental, grassroots and international efforts should be integrated into the program, with a focus on peer review and transparency. An interagency permit approval process that will enable researchers to plan and execute deliberate releases in U.S. waters also is needed, NRC said in its report on recommendations for improving the United States’ readiness in preventing and responding to oil spills.

Oil spill research priorities should leverage existing joint agreements and be address through a “comprehensive, coordinated effort” that links industry, government, academia, international and local experts, and non-government organizations, NRC said in the report. NRC also recommended that the Interagency Coordinating Committee on Oil Pollution Research, which is responsible for coordinating oil spill research and development among agencies and other partners, should head up the oil spill research effort.

“Industry takes the subject of safe operations and protection of the environment in the Arctic seriously,” API said in an April 23 statement to Rigzone. “We’re encouraged by the report’s emphasis on the need for the full toolbox of spill response technologies to be available in the event of an incident, because – as the report says – no single technique can be guaranteed to work in all situations.”

API said it supports the report’s call for collaboration in research, openness to sharing data and research findings, its emphasis on prevention, its call for support for an increased Coast Guard presence and capability in the Arctic, and for pursuit of oil spill research that includes a program of controlled releases of oil under careful protocols so that government, the public and industry can get the information necessary to assure the best possible spill response capability in the Arctic environment.

“We look forward to working with the NRC, federal and state government representatives, and other stakeholders to ensure that we have an appropriate, effective and efficient system in place to prevent, mitigate and respond to spills in the Arctic,” API said.

Industry and academia continue to research Arctic oil spill technology as the global oil and gas industry turns its attention to Arctic exploration and production. One oil and gas industry-led effort is the Arctic Oil Spill Response Joint Industry Programme, which was launched in January 2012 to examine the effectiveness of existing oil spill response technology.

A ‘tremendous amount’ of oil spill recovery research currently is taking place at Ohmsett, BSEE’s National Oil Spill Research and Renewable Energy Test Facility, in addition to the ongoing work with BSEE’s international partners through the Arctic Council, said BSEE’s Alaska Region Director Mark Fesmire during an April 17 panel discussion in Washington D.C. on applying lessons learned in Arctic drilling. Fesmire said that BSEE is committed to ensuring that Arctic drilling operations, if they occur, will be done safely.