Growing dependence on petroleum revenue has nudged Timor Leste to proceed with plans to further develop the sector as the government hopes to boost the investment climate and offer foreign investors access to new onshore exploration blocks in the country.

The significance of the hydrocarbon sector in an economically undeveloped Timor Leste cannot be understated, with estimates from the World Bank indicating that petroleum revenues contributed 89 percent of the country’s budget for fiscal year 2014. The petroleum sector – upstream and downstream – will provide an industrial base to the country’s economy, according to Timor-Leste’s Strategic Development Plan 2011-2030. 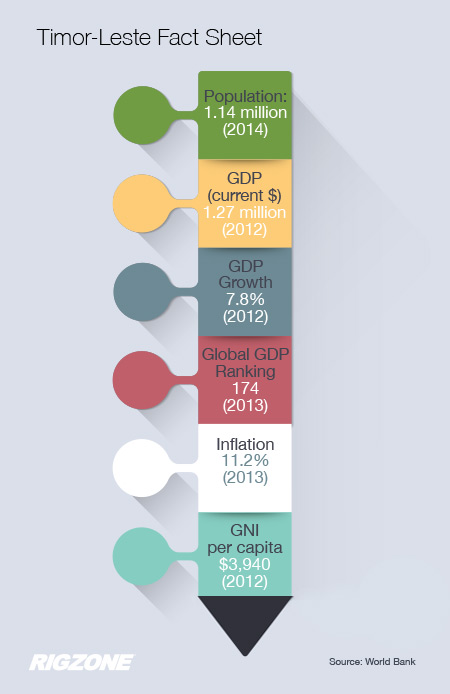 Without its petroleum wealth, Timor Leste – previously known as East Timor and an independent state since 2002 – would have fallen down the listing of world’s economies. According to the World Bank, the former Portuguese and Indonesian territory was ranked a lowly 174 among the world’s economies in 2013.

Petroleum has contributed $11.42 billion in revenue to Timor-Leste after it began compiling statistics around 2004 following its independence a few years earlier, figures from the website of Autoridade Nacional do Petroleo (ANP) – Timor Leste’s National Petroleum Authority – showed. 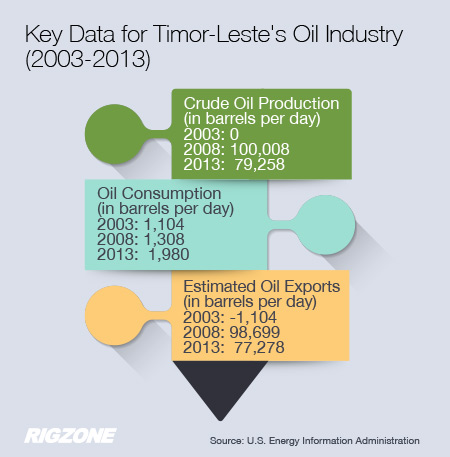 In 2013, the country exported 77,278 barrels of oil per day (bopd) out of the 79,258 bopd it produced, the United States Energy Information Administration (EIA) said.

Timor-Leste joined the league of petroleum producers in 1998, when operator ConocoPhillips commenced production from the offshore Elang, Kakatua and Kakatua North (EKKN) field after discovering oil in 1994. The EKKN field, which lies in the Joint Petroleum Development Area (JPDA) 03-12 in the Timor Sea between Timor-Leste and Australia, was abandoned by the operator in 2007.

Meanwhile, production from the Kitan oil field in JPDA 06-105 in the Timor Sea also contributed to the state coffer. Kitan’s operator Italy’s Eni S.p.A. commenced production at the field in 2011, with production peaking at 45,000 barrels of oil per day (bopd) in 2012 to 2013 as the field reached “profit oil in eight months, thanks to high oil prices,” Mateus da Costa, ANP’s director of Exploration & Acreage Release told an industry conference in Singapore last month.

NO PROGRESS ON SUNRISE PROJECT

Given falling domestic production, Timor-Leste would benefit if the stalled Sunrise liquefied natural gas (LNG) project, consisting of the Sunrise and Troubadour gas and condensate fields discovered in 1974, gets the greenlight for development. Field operator Australia’s Woodside Petroleum Ltd. has indicated that gross Sunrise LNG project has contingent resources (2C) of 5.1 trillion cubic feet (Tcf) and 225.9 million barrels of condensate.

Woodside and its partners are now in discussions with Timor-Leste on potentially building an onshore LNG plant in the country for the Sunrise project, signaling a possible shift from the joint venture’s preference for a floating LNG development option.

“We have been in discussions with the Timorese around different development concepts, both floating and onshore,” Coleman told Reuters, as Timor-Leste has insisted on constructing an onshore plant for the Timor Sea gas project.

The governments in Australia and Timor-Leste agreed to temporarily set aside international arbitration relating to the Treaty of Certain Maritime Arrangements in the Timor Sea as they tried to resolve their disputes bilaterally. The Sunrise joint venture will proceed with project development upon successful resolution of the dispute.

“We have kicked that off. We have set a pretty aggressive timeline to conclude that. We are hopeful in the first half of next year we will have matured that quite a lot,” Coleman said in reference to the need for the Sunrise joint venture to negotiate a fiscal package with the Timor-Leste government for an onshore plant before launching engineering studies for building a pipeline and onshore plant.

ANP would only indicate that the Sunrise development was under discussion by the relevant parties.

“At the moment, what we know is that it is still in the field development concept studies (stage), whether [the onshore plant is] coming to Australia, whether a floating vessel or whether to onshore Timor-Leste. Those three concepts are still on the table and we are still at that stage,” Mateus da Costa told Rigzone.

The government has made some moves in the petroleum industry to strengthen Timor-Leste’s appeal to foreign investors, the ANP director said at the Singapore conference.

The relevant authorities are now carrying out legal framework reviews, focusing on these areas:

“We seek the views of the relevant ministries and industries and await their comments and inputs. We are talking to community leaders and local authorities and also seek the opinions of non-governmental organizations and civil societies … we are at the end of final submission to the council of Ministries for their review and final approval,” da Costa said.

In addition, the government is aware that the Timor-Leste does not possess adequate infrastructure to support the oil and gas industry.

To tackle the infrastructure constraints facing the petroleum industry, the government plans to construct multi-million dollars projects at three sites on or near to Timor-Leste’s southern coast, where most of its existing offshore oil and gas projects are located.

The first project comprises a supply base at Nova Suai, while the second project will consist of the building of a mini refinery with a processing capacity of around 35,000 barrels of oil per day (bopd) at Nova Betto, east of Nova Suai as well as a new petrochemical plant at Nova Betto. The government has also earmarked the construction of a LNG plant in Nova Viqueque, possibly using gas piped from offshore fields, including those from the Sunrise project, to the south of the country.

“Groundbreaking [for the infrastructure project] has started … We are looking at a period of three to as many as 10 years [for the construction] to complete. Financing for the projects will be provided by the government and loans from the private sector,” the ANP staff said.

Timor-Leste also aims to raise domestic participation in its oil and gas sector. While the state has imposed “local content requirement in the industry, the policy is not as strongly enforced as in [regional petroleum producers] Malaysia and Indonesia. There are certain labor skills the operators need to take from Timor-Leste … but other than that they can go and take from different places,” da Costa told Rigzone.

“There is no fixed percentage for local content at the moment. Yes, we are looking at that … Hopefully things may change once we have the necessary infrastructures in place or the relevant business in place,” the ANP director elaborated.

On human resource, the government is saddled with the problem of creating jobs in the oil and gas sector for Timorese students who have returned home after completing their petroleum education overseas. This has in turn created more urgency for the government to encourage greater upstream development activity in the country.

“The issue the government is facing is that we are being flooded with the relevant skills such as petroleum engineering, petroleum geologists … the problem now is where to get them the jobs. The other challenge is that they don’t have any experience at all, so it’s not easy to get a job,” da Costa said.

“More efforts are needed to create opportunities in jobs related to their training and through secondment for their development. ANP and national oil company Timor Gap E.P. have recommended to relevant operators and service companies in the country to take on those better qualified new graduates through the recruitment process so that they can get some sort of skills and be ready to jump into the industry,” he explained.

In a related development, ANP is working closely with the Ministry for Employment and Training to establish a training center for the oil and gas sector. This will enable Timor-Leste to offer relevant certified oil and gas training programs.

Timor-Leste intends to commence the pre-qualification round for its petroleum acreage in the middle of this year, with award of production sharing contracts (PSC) scheduled for the second half of 2015. 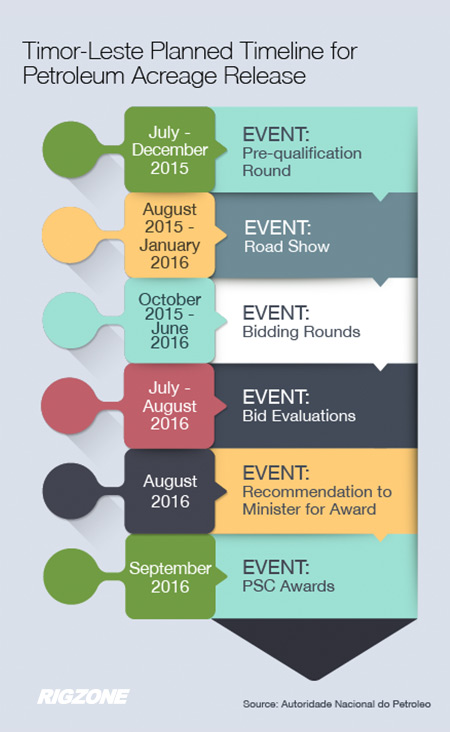 The ANP official noted that the challenge for onshore blocks in Timor-Leste is on land laws and property rights. However, given the government’s intention to develop the petroleum industry, it appears highly possible that Timor-Leste will press ahead with the bidding exercise as planned.