Amidst declining oil prices and uncertainty with the current economic environment, four in ten (44%) U.S. hiring managers in oil and gas anticipate less hiring in the first half of the year compared to the second half of 2014, according to Rigzone’s semi-annual hiring survey. Nearly a quarter (22%) expect more hiring and only five percent intend to not hire at all in the next six months. 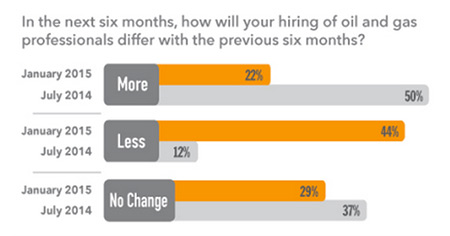 The survey results paint a picture of ambiguity for oil and gas professionals in the year ahead, a steep change from survey results just six months prior when half of hiring managers planned to hire more. In fact, 48 percent of hiring managers said they’ve experienced a loss of budgeted positions due to market volatility, up from 18 percent who said this at the mid-year survey.

Layoffs are also more likely with 36 percent of hiring managers saying they’re likely compared to 11 percent who said this in July.

“The shift in outlook underscores how quickly companies are adjusting their plans to the current economy with many oil and gas firms bracing for what could be a difficult 2015,” said Bob Melk, President of Rigzone. “Companies are watching falling oil prices and putting a pause on some hiring plans as a result.”

While companies reassess filling open positions, candidates are becoming less choosy with their career choices. Twenty-two percent of candidates are rejecting offers, a five point drop from July. Plus, 37 percent of hiring managers note candidates are asking for more money a sharp decline from mid-year when 61 percent experienced talent bargaining for more pay.

Companies with open positions are benefiting from an increase in candidates applying with half (54%) reporting an uptick in applies compared to 47 percent who said this in July. Still, 47 percent said they were unable to fill open positions due to compensation requirements for the role.

“The changing oil and gas market can be positive for companies who are indeed hiring and looking for premium candidates that may have otherwise been unavailable earlier in the year,” said Mr. Melk.

Oil and gas companies expect professionals to hold steady in the next six months with 68 percent expecting no increase in voluntary departures.

From December 15, 2014 to January 2, 2015, Rigzone surveyed hiring managers and recruiters who primarily recruit for U.S. energy professionals. Covering upstream, downstream, corporate and college recruiting, 114 responded to the survey, with 26% representing companies that have more than 5,000 employees.