With at least two mega gas or liquefied natural gas projects on the horizon, Indonesia could well buck the trend of reduced oil and gas exploration and production (E&P) in Southeast Asia if the country’s regulations were revised in support its upstream sector.

At a BMI Research briefing, senior oil and gas analyst, Shun Ling Yap flagged Indonesia as potentially “a notable exception” to cutbacks on E&P already unveiled elsewhere in Asia “if and when upstream regulations are overhauled under newly-appointed President Joko Widodo”.

Shun expects the clarification of the regulatory framework projected for mid-2015 to prompt investors to redirect their attention to the large market in Indonesia.

Shun’s projection is backed up by BMI’s growth projections for the Indonesian economy.  Indonesia stands with India as among two exceptions in Asia, with growth rates forecasted to continue an expansionary trajectory over 2013 levels in contrast to contractions in China and Japan.

Indonesia’s expansive gas-powered economy has already driven the country’s national oil company, PT Pertamina to seek more liquefied natural gas (LNG) imports, which are available at lower prices thanks to falling oil prices. Indonesia – as with India – started a trend of importing LNG from 2013, which will continue to ramp up in South and Southeast Asia, according to BMI.

To reduce its reliance on LNG imports, however, Indonesia would need to ramp up the development of its gas reserves.

Progress on the two mega projects had stalled. Chevron announced last year its intent to revise the plan of development to include the commercialization of a newly found gas field.  Inpex had made no noticeable progress after wrapping up the front-end engineering and design (FEED) studies on the Abadi FLNG late last year. 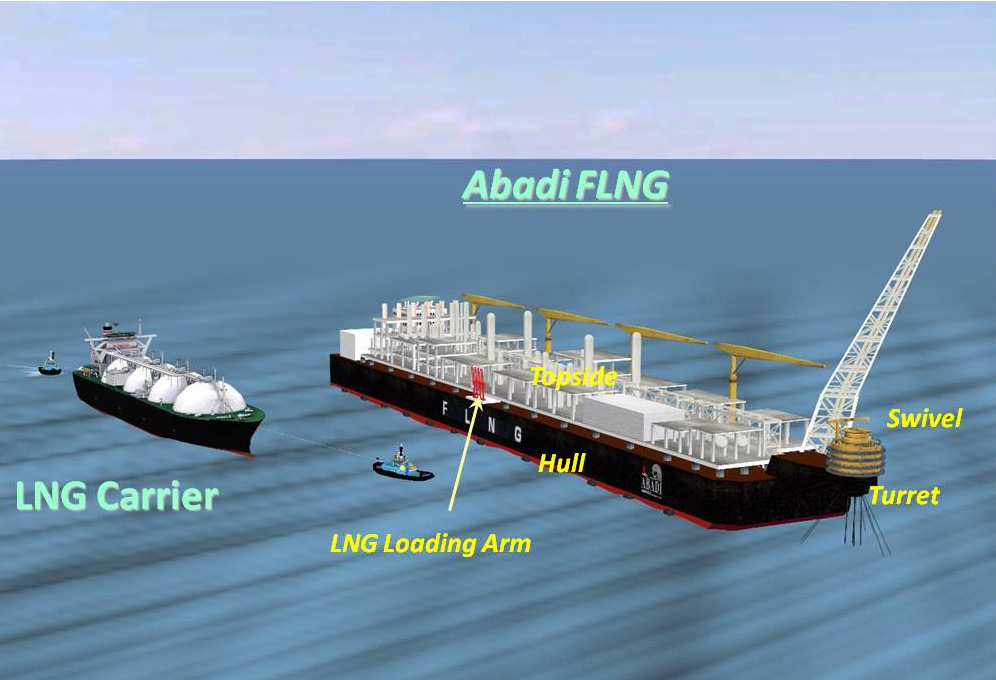 Both projects were partly held back by ongoing negotiations between the operators and the Indonesian government on the extension of PSCs.

Inpex is seeking for an extension on the Masela PSC until 2048 while Chevron has reportedly sought to extend the Makassar PSC until 2028.

Despite the apparent impasse, Inpex reiterated its commitment to press on with the Abadi FLNG development. In a statement to Rigzone, Inpex confirmed that FEED for the proposed 2.5 million ton per annum (Mtpa) FLNG based on the first plan of development (POD), or POD-1, was completed in November 2014.

Inpex said the FEED results and the reserves upgrade – following appraisal drilling in 2013 and 2014 – are now being evaluated in its further attempt to optimize the field development plan.

The Japanese field operator said the options being considered include “scaling up production capacity” but did not reveal any further details.

The final size of the FLNG will be subject to several financial considerations such as project insurance, which could be close to double that of the originally proposed 2.5 Mtpa unit, informed sources said.

Meanwhile, Chevron is also reportedly lining up a new tender plan for the delayed Gendalo-Gehem field development. A new POD for Gendalo-Gehem had been drawn up, according to sources, but it is unclear if approval has been granted by Indonesia’s upstream regulatory body, SKKMigas.

The new Gendalo-Gehem POD is expanded to involve the development of the Ranggas gas field in the Rapak PSC.

In a statement to Rigzone, Chevron said its planned 63 percent-owned Gendalo-Gehem development is sticking to a design capacity o 1.1 billion cubic feet per day of gas, with condensate output projected at 47,000 barrels per day. The U.S. major continues to work towards a final investment decision, subject to the timing of government approvals, rebidding of the engineering and construction contracts, extension of the associated PSCs and securing new LNG sales, a spokesperson added.

Each of the two mega projects will inject billions of dollars into Indonesia’s upstream sector, but BMI warned against possible setbacks.

BMI’s Head of Corporates, Andrew Steel cautioned against “unfavorable” financing landscape for oil and gas projects in Indonesia, which could take three to seven years to improve.

Indonesia also has a track record of sanctioning only a handful of identified key projects, Steel observed.

Steel, noting the fragmented and bureaucratic nature of the Indonesian administration, said “Jokowi needs to garner enough support to pass [any] legislation.”

The Jokowi administration had reportedly embarked on restructuring SKKMigas and this is expected to wrap up during the current quarter, in line with BMI’s projection.

In addition to the concerns raised by BMI, the project economics of the Abadi FLNG and Gendalo-Gehem gas and condensate developments will also be subject to securing LNG offtake at agreeable prices.

At the start of 2015, analysts at Oxford Institute for Energy Studies, Bloomberg New Energy Finance and Holmwood Consulting have already signaled room for oil-linked LNG prices in Asia to trend down to below $10 per million British thermal unit later this year.

BMI hinted at softening demand from major LNG importing country, Japan, by alluding to the potential reactivation of between 40 percent and 50 percent of the nuclear reactors in the country.

The saving grace for the LNG market as the research group suggested, could come from import demand from Southeast Asia. Indonesia has reiterated on many occasions before Jokowi’s ascendancy to presidency, its intent to push for larger domestic gas allocation from sanctioned field developments.

The price gap between domestic gas sales in Indonesia and LNG exports has narrowed as the regional Japan Crude Cocktail benchmark weakened amid lower crude prices.”