The oil market and energy investors alike have been showing signs of optimism that the industry is potentially emerging from a downturn that commenced in July 2014, when crude prices started to fall from highs of $112/bbl to eventual lows of $26/bbl (seen in January 2016). Since the last week of February, however, oil prices have traded up at the end of each successive week, approaching or exceeding $40/bbl, which has led many to believe we are finally turning the corner.

Talk of a possible oil output freeze among major OPEC and non-OPEC producers, plus data points that U.S. onshore production growth is slowing down, and signals that Iranian crude volumes will be lower than anticipated since sanctions were lifted, have helped propel some relatively bullish market sentiment.

Given this apparent change in the macro environment for the oil industry, what are the prospects for drilling and oilfield service companies over the next 12 to 18 months? The short answer is that it is still not clear whether or not more positive sentiment in the market will usher in a new phase of the cycle, wherein operators are willing to start dipping their toes back in the water and sanction new projects or begin to curtail the pattern of deferring major capital investments.

Too much uncertainty still lingers, though. Despite market anticipation that a freeze is a step in the right direction to possibly coordinate a future output cut, which would be a surefire way to stabilize global oil prices, there are too many downside risks to a deal coming to fruition in the short-term.

Also, the fact remains that there are approximately 1 billion barrels of crude oil in storage globally. With the current supply/demand imbalance estimated by some to be between 1-2 billion barrels, and demand growth forecast by the International Energy Agency (IEA) predicted at around 1.2 million b/d, consensus is that the glut might only start clearing in mid-to late 2017. It appears that the market will have to wait until the next meeting of OPEC – currently set for June 2, 2016 – to receive the most concrete evidence of the willingness of its members to participate in a coordinated output cut, which would also include a major non-OPEC producer, Russia.

Until that point, oil and gas companies will continue to focus on cost-cutting and reaping further operational efficiencies. Companies now, across the board, are rewarded by investors for squeezing supply chains and embracing cost deflation, which has had a disproportionate effect on drillers and oilfield service companies. Energy investors are paying for the adherence to these measures and are deviating from the traditional E&P investment model that sought value from reserves and production growth. Although in 2015, it should be noted, that despite this shifting paradigm, the increase in U.S. onshore production (over 2014 levels) was partially driven by the way company executives had been incentivized – to increase production and reserves growth. In 2016, management targets look more clearly defined by cost reduction – judging from company guidance provided during recent earnings calls.

As we have seen since the oil price slide began in July 2014, the offshore drilling sector has seen dramatic drops in day rates and utilization rates for all rig types (drillships, semisubmersibles, and jackups). Apart from a few bright spots around the globe, namely the Middle East, the global drilling market is oversupplied. As a result, day rates and utilization will continue to suffer until there is a clear and decisive signal from the oil markets that prices are on the upswing.

Data taken from RigLogix shows the drop in average day rates and utilization for the global rig fleet (all types) for the period of July 2014 to the present. 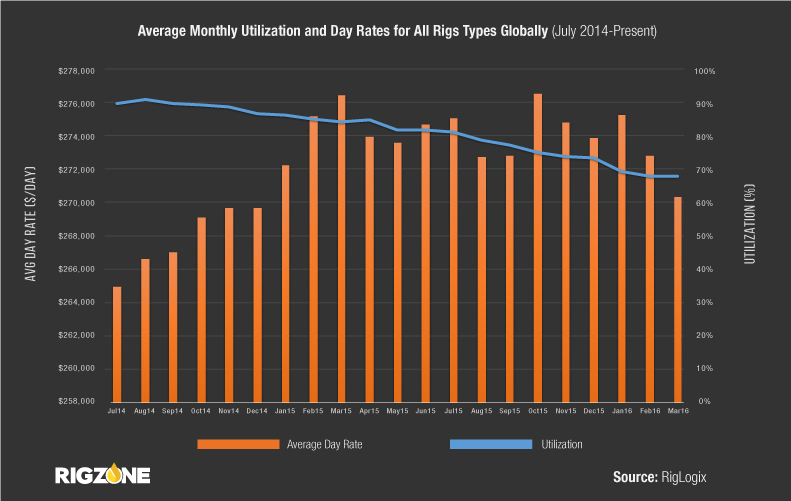