Few will be surprised if one of the first items taken up for vote by the 114st United States Congress next year is TransCanada Corp.’s Keystone XL pipeline, a divisive project with a long history of delays.

Having lost a narrow vote in November 2014 when the U.S. Senate was still controlled by Democrats, the project is expected to pass the Republican-controlled House and Senate in 2015 and end up on President Barack Obama’s desk, where it will either be approved or denied.

Alberta’s oil sands, which are also called tar sands, contains bitumen, which gives the oil sands the consistency of peanut butter and requires dilution to make the oil easier to transport. The extraction process for bitumen is more difficult and expensive than regular crude oil, and requires more energy to extract and refine.

TransCanada first proposed the idea of shipping crude oil and the diluted bitumen from Alberta’s oil sands to refineries in the United States in 2005, and much of the pipeline – the first three phases – has been built, including a smaller pipeline from Alberta to Illinois. A fourth phase, consisting of a larger, 36-inch pipeline 1,179 miles long that would move the oil sands from Hardisty, Canada to Steele City, Nebraska, would complete the pipeline, allowing product to be transported down to Texas refineries on the Gulf Coast, according to TransCanada. This fourth phase is Keystone XL. 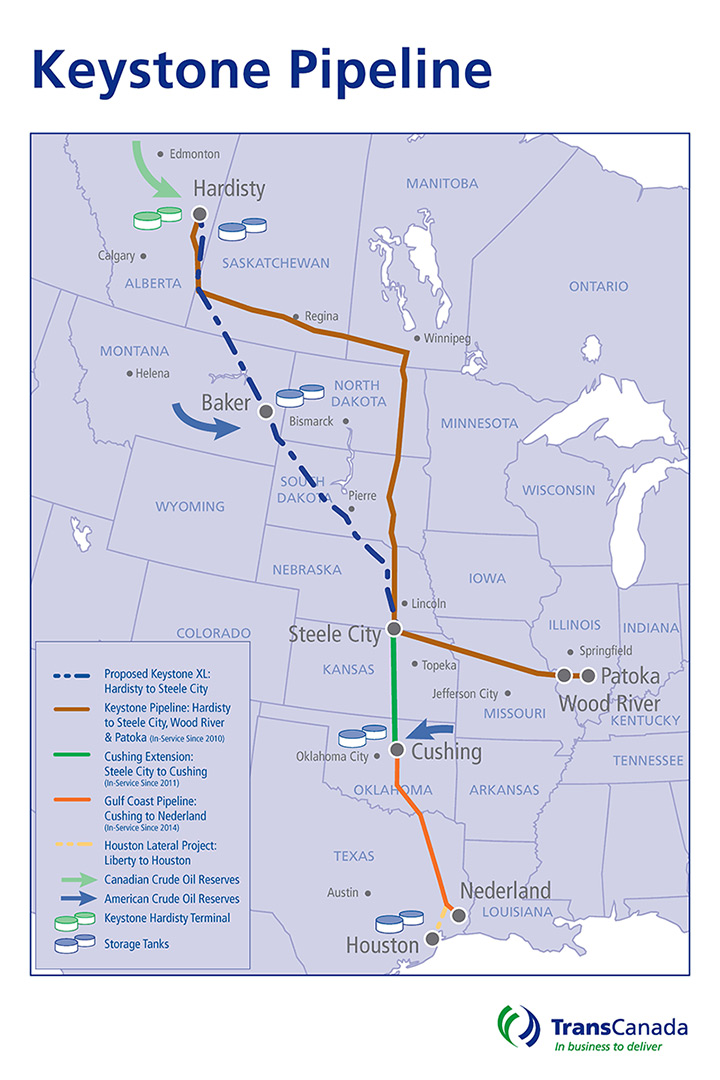 The pipeline was not always a politically divisive issue. When it was first proposed, it was a $5 billion pipeline project that would transport production from Canada to Nebraska. Up to 830,000 barrels of oil, most of it from Alberta’s oil sands and the rest from North Dakota’s Bakken shale formation, would be transported through the pipeline each day, according to Vox, an online news site. From Nebraska, product would move through the Cushing Extension, the part of the pipeline that connects Nebraska to Cushing, Oklahoma. From there, product would flow to Nederland, Texas on the Gulf Coast Pipeline, and to Houston, Texas on the Houston Lateral Project.

It was during the environmental impact studies for KXL that environmental organizations learned that the pipeline would be extracting the bitumen from a forested area of Canada that is about the size of Florida that the controversy – and the delays, which have added about $3 billion to the cost – began, according to Houston Media Radio, a Houston-area news program.

The most recent environmental impact statement by the State Department concludes that approval or denial of the Keystone XL “remains unlikely to significantly impact the rate of extraction in the oil sands, or the continued demand for heavy crude oil at refineries in the United States.” In other words, denying the project would not stop production activities in the Alberta oil sands.

Supporters say the pipeline is simply a way of moving crude oil from Canada to U.S. refineries, that it would create thousands of jobs, and that a pipeline would be safer than using railcars.

While transporting by rail has lower initial costs and other advantages, pipelines are safer on a per-barrel basis, emit fewer emissions than railcars, and are more efficient than rail transport, according to International Energy Agency Oil Market Analyst Charles Esser at a University of Houston Energy Symposium.

However, others have questioned whether rail would, in fact, be used for transport of the oil sands if the pipeline is not built. The drop in crude oil prices in recent months makes railcar transport, which is more expensive than transporting by pipeline and less financially viable. A study by Reuter’s Patrick Ricker concluded that rail transport was not feasible. Also, many industry officials have been skeptical about transporting oil sands by rail, and see the pipeline as essential to getting the product to market, according to Climate Progress, an environmental group.

If oil sands from Canada will make it to the market whether the pipeline is built or not, then moving the product through a pipeline would not only produce fewer emissions than transporting it using other methods, such as rail or truck, but it would also be safer than other methods of transport, according to the President of the Consumer Energy Alliance, David Holt, during a broadcast of Houston Public Radio.

“Pipelines are an order of magnitude safer and more environmentally responsible than any other mode of transportation for crude and natural gas. Whether or not we permit the Keystone pipeline, the crude oil in Canada is going to be produced. In the State Department’s own report, they said that without Keystone, the emissions impact to ship that [Alberta oil sands] to the east and the west, and to take it to China and elsewhere, could be a 600 percent increase in emissions,” Holt said.

THE PIPELINE AS AN ENGINE FOR JOB CREATION

Regarding how many jobs would be generated by the construction of the Keystone XL, different reporting entities have come up with a wide range of numbers.

Although the U.S. State Department has said that constructing the pipeline would create 42,000 jobs, a figure also used by American Petroleum Institute (API) and other industry leaders, the State Department also said that most of the jobs created will be non-local and temporary.

The State Department study said that there would be 35 permanent jobs and 3,900 temporary construction jobs, with the rest being support jobs or indirect jobs created through the multiplier effect of energy industry hiring on the overall economy. The State Department also says that the project would contribute billions of dollars to the U.S. economy.

TransCanada says the State Department permanent job figure is incorrect, and that its pipeline system will support the creation of over 20,000 jobs in the United States, including 13,000 construction jobs – 9,000 of which would be on the Keystone XL, while 4,000 would be on the Gulf Coast project. TransCanada also said the pipeline could create another 7,000 manufacturing jobs.

“There’s a lot of Democrats who are telling Obama, ‘Enough is enough,’” said API President and CEO Jack Gerard in a recent energy webinar, adding that the public is impatient to see the pipeline built.

“The American people have made it clear they want the

Load more listings
and energy security the pipeline will provide. Keystone XL is not going away. And we are resolved to continue the fight.”