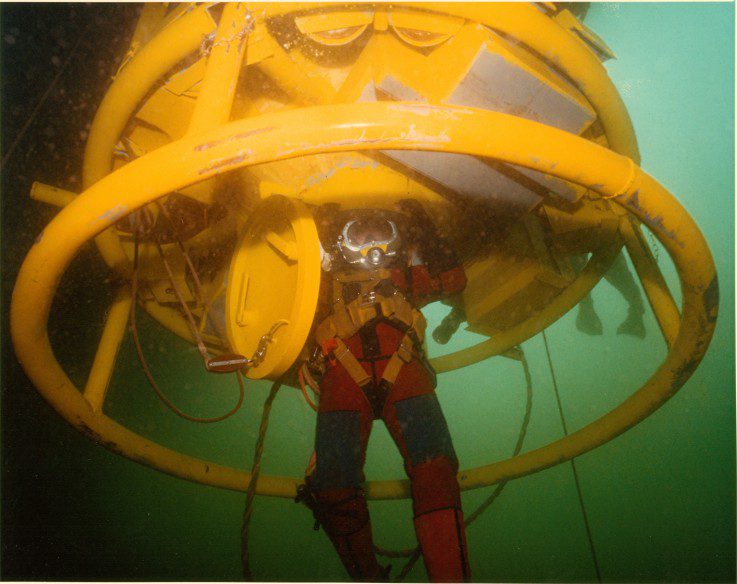 We came across this blog shared on our Facebook page by Francis Hermans. We find the story interesting and would like to re-share it. In the past, we heard a lot of stories, read news and watch videos of some dangerous activities in Commercial Diving. If ever you want to know what happened with the Commercial Diver in the story, take time to read and feel free to give your comments about it.

In 1976 I signed a contract with COMEX HOULDER to be a sat diver on the jet barge CREEK, which belonged to the Santa Fe Company.

The work season started in May and until October the barge worked in the North Sea to dig many miles of pipelines.

I had started my offshore freelance diver career one year earlier and had  already worked with British (and Scottish) on the L.B.27, but now I was a bit more anxious because I was going to make a saturation with them and therefore was afraid to not always understand their terrific accent.

The first days in sat were very difficult and more than once I had to ask my mates to write on a piece of paper what they wanted to tell me.

But fortunately for me it didn’t take too long to get used to their Donald Duck voices.

At the same time, I suppose that my English was more pure than theirs, because more than once, the chamber operator came to me to ask what the other guys in the chamber wanted.

Since the beginning of the working season, I was making a team with Tiny Gulliver.

He was at least twice as strong as me and the pair of us looked a bit like Stan Laurel (me) and Oliver Hardy (him).Nevertheless, we made a perfect team and I liked working with him.

As on every jet barge, our main task was to install the huge claw over the pipe and then make an inspection dive of the trench and the sledge about every six hours.

In fact a relatively well paid, easy job with a lot of boring moments between each dives.

The only problem when you work on a jet barge is, if we except the dive made to install the claw, that most of the time, the inspection dives are made with zero visibility.

This is due to the fact that the water pumps and the airlifts of the jet machine are stopped at the very last moment, just a few seconds before the diver leaves the bell.

On the 19 of august 1976 the sea was really bad on Ninian field but nevertheless the barge continued to pull the jet sledge over the pipe and it was time for Tiny and me to dive for the inspection of the trench.

It was my turn to dive so Tiny went into the bell to make the checklist.

Once completed I joined him in the bell and we were ready to be send down.

During the translation of the bell to the stern of the barge we could see through the portholes that the sea was quite raging and we could feel a big swell.

The entry in the water was a bit rough but after a few meters the bell stabilised and we could now be lowered to the bottom without being shaken like a plum – tree.

As usual the bellman announced the depths every 10 meters.

“145 meters” replied the supervisor, “we lower the bell slowly now.”

At 150 meters the bellman announced “door open” and as usual, we decided to lower the bell 3 to 4 meters more so as to be closer to the seabed.

We were now stabilized at 154 m and the supervisor told me that I could get equipped.

Tiny fixed the bail out, the hot water and finally the KMB 16 and I was now ready to go.

Me: Surface how do you read me?

Surf: Loud and clear Francis. Ok everything is stopped, you can leave the bell.

Me: Ok ready to leave the bell.

So I straightened my arms on the hub to ease the passage of the 1er stage reducer and gently let myself go through it, when suddenly Baouhhmm !!!  The bell smashed onto the bottom and I was there, standing on the seabed in the middle of the bell.

Baouhhmm !!!, with the swell, the bell hit the bottom again with violence. I was still in the middle of the hub, trying to find a grip somewhere to avoid passing under the bell what would probably have been fatal for me.

Luckily for me, Tiny also had understood what was happening and this time before the bell hit the bottom for the third time he grasped the top of my helmet and pulled me completely out of the water.

Wouah! My neck I screamed but at least I was now save in the bell.

The bell smashed the bottom once more, but then we heard the supervisor shout at us that he was coming up at the bell for 5 meters.

When everything was stabilised, the supervisor asked me if I was OK and able to continue the dive or preferred to abort it.

Although this dive could have been my last one if I had started to dive a few seconds earlier I preferred to continue immediately before my mind realised the consequences of the situation.

So again, I slipped in the water and search for the guide line which was to bring me to the sledge.

In fact what had happened? It seems that the pneumo installed on the jet was a bit faulty and therefore had given a false depth reading.

But the other cause of the near miss was that we dived with a very big swell, which made the bell have vertical amplitude of about 5 meters.

Luckily for us the ballast weight release system of the bell had been modified some time before and the fact that we hit the bottom several time didn’t drop them off accidentally as it happened some years before to another stranded bell.

–        If you have to make a bell (or wet bell) dive in zero visibility always measure the distance between the hub and the seabed with a measuring tape or rope before leaving it to be sure that the bell is not too close of the bottom.