Despite his decade-long quest on behalf of wreck owner Gregg Bemis for answers to the century-old question about what caused the mysterious second explosion, McGarry says they are still no closer to a definite answer about whether the liner was carrying an illicit cargo of weapons.

The State must take a fair share of the blame for the failure to resolve the mystery, a frustrated McGarry says.

The State is attaching a raft of onerous conditions to Bemis’s diving licences which make it virtually impossible to explore the wreck properly, and to retrieve artifacts Bemis would like to display in museums, he says.

In one of his most outspoken interviews, McGarry has accused the State of frustrating Bemis’s legitimate efforts to explore the wreck, and of stifling his diving expeditions with paperwork.

“State officials are handling this situation all wrong. They are way out of their depth — they have no interest in the wreck.

“The conditions they’re attaching are not protecting the wreck. They are actually denying the owner the right to his property. He [Bemis] wants to retrieve items for display in an Irish museum. He is not in this for the mon-ey. He is in it for answers.”

Bemis, a US multimillionaire venture capitalist aged in his 80s, bought the wreck in 1968. When the state challenged his ownership, Bemis mounted a legal battle to assert his rights. It took a decade, but he won. Estimates have put the cost to the Irish taxpayer of the State’s action at almost €1m.

However, Bemis’s problems worsened when, in 1995, the then arts minister, Michael D Higgins, imposed a cultural heritage order on the wreck which declared it an archaeological site — the only 20th century wreck with such a designation.

The move was designed to protect the site as a grave and to protect artifacts on board which might include paintings that were being transported across the Atlantic by Hugh Lane.

The designation means that even though Bemis owns the structure, the State controls, by way of licence, how and when dives on the wreck site can take place.

Under the terms of his current licence, Bemis can remove items from the wreck, but only if he meets certain conditions.

McGarry says the most onerous conditions stipulate the hiring of an archaeologist from a department approved panel to monitor the dives, and, crucially, a condition which forces Bemis to indemnify the State for the duration of the dives.

“We’ve been strangled for 20 years now and Gregg at this stage is despondent at the prolonged situation,” he says.

“Divers from all over the world would like to dive on the wreck. But the conditions are too onerous, too detailed, and the response from the department to requests to dive is just too slow.”

Despite the State’s efforts to control dives, McGarry says it is doing little or nothing to prevent damage being caused to the wreck by illegal dives and commercial fishing in the area.

“The ironic thing is that, despite the fact that the wreck is protected, commercial fishing fleet operate in the area and their nets can get caught in the wreck and damage it,” he says.

“I’ve seen them myself and the nets are strangling the wreck.”

Once it was struck by the torpedo a century ago, the vessel sank within minutes and plunged 90m to the bottom of the Atlantic.

It struck the seafloor bow first, sustaining huge impact damaged. As the vast weight of the superstructure pressed down, the concertina effect further twisted, buckled, and warped the bow before the sunken liner rolled to its side and came to rest on its starboard side. Its final resting position has concealed for almost a century the torpedo wound.

Diving on the wreck is technically very complex and extremely dangerous. Only the most proficient and highly skilled divers can operate at 90m and deal with the conditions which prevail at the wreck site. 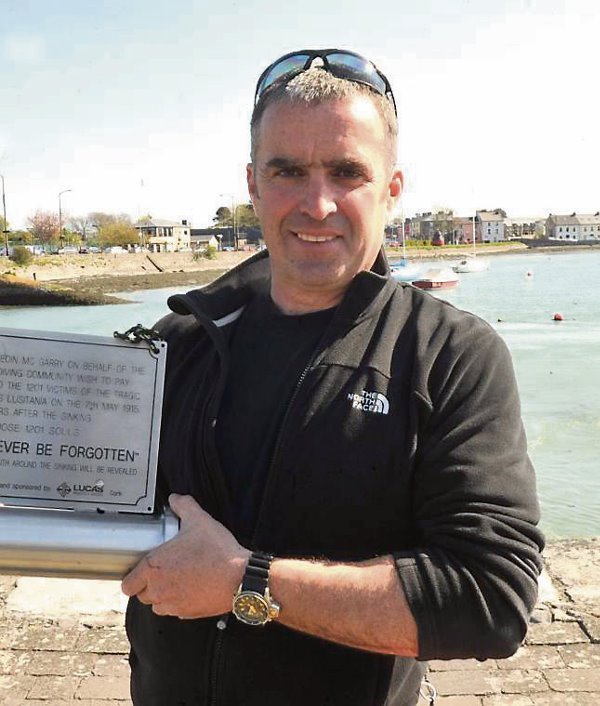 McGarry, has dived on most wrecks off the Irish coast, saying he was hooked after his first dive on the Lusitania almost 15 years ago. “Once I went and did it, I had to go back, I was hooked. It’s like going back in time,” he says.

“It was the biggest and fastest passenger ship of its time, the Greyhound of the Seas. One dive just wouldn’t cut it. It’s taken me 10 years to get to know the wreck.

“And even after all this time, I am still scratching the surface of it — she has so much more to give.”

He was involved in a multi-million-dollar National Geographic documentary about two years ago which probed the vessel deeper than any expedition before.

Despite the investment, few items were recovered and, ultimately, the expedition couldn’t identify the cause of the mystery second explosion

“We think we know she had an illicit cargo. We just want to resolve this and tell its history,” McGarry says.

Despite the pressure of water and darkness at that depth, McGarry says it is a strangely moving experience to float just inches above the wreck. “It takes up to 90 minutes to decompress and as you wait at various depths on the way back up, it gives you time to reflect, and to think about what you saw on the bottom,” McGarry says.

McGarry plans to mark the centenary of the immense human tragedy by diving on the wreck on May 7, and at 2.15pm in a slack tide, which will occur almost exactly a century to the minute after she sank, to lay a plague on the superstructure in memory of those who died.

He has typed on a scroll the names of all the victims. He will seal this in a canister and place it alongside the plague. He had hoped to be able to incorporate the ship’s whistle — the voice of the ship — in some of the land-based centenary commemorations but says the diving licence conditions hampered plans to retrieve it.

As well as retrieving the Lusitania’s whistle, McGarry says he would like to retrieve what is probably the last of the ship’s telegraph machines; the others have either been destroyed or pillaged. It’s located on the bridge and its handles are in a locked position — which means that it could categorically reveal the last order given on the bridge.

“Theories abound but none have been proven — the evidence hasn’t been found to support any one theory,” McGarry said.

“No documentary has ever gotten to the bottom of the mystery.

“Somebody somewhere knows that happened and knows what she was carrying. The only way is to probe further.

“The wreck itself is largely intact. There are just a handful of items that I can recover with my bare hands.

“But my worst fear is that things will get worse before we can find out. At least we are trying to find out.”

A spokesperson for the Departmemt of Arts, Culture, and the Gaeltacht said the conditions attached to Gregg Bemis’s current dive licence, which runs to the end of this year, are largely the same as earlier licences he has obtained from the department.

“There is no evident reason why the conditions as they stand should be regarded as overly onerous or as an impediment to any future dive project on the wreck of the Lusitania assuming the intention was to adhere to the same general standards as projects undertaken in 2008 and 2011.”