In a given year, Brazil imports nearly $70 billion in goods and services from the United States, according to figures from the Office of the U.S. Trade Representative. Some of the top U.S. products that make their way to Latin America’s largest economy include refined petroleum, electrical machinery, aircraft and organic chemicals.

In Walter Fróes’ opinion, Brazil needs another import from its northern trading partner: the expertise necessary to economically produce hydrocarbons from its virtually untapped shale formations.

“If we have shale gas, it will be a revolution,” said Fróes, CEO of CMU Energy Trading Co., a consulting firm based in the southeastern Brazilian city of Belo Horizonte, located in Minas Gerais state.

Brazil obtains more than three-quarters of its electricity from hydropower, and lingering drought conditions in the country have exposed the shortcomings of this heavy reliance on hydro.

“Because of environmental problems, we don’t build hydro power plants with reservoirs in Brazil anymore,” explained Fróes. “As a result of that, the hydro generation has become similar to wind generation, which means that when the rains are good, electricity production is good. When the wind is good, generation is good. “

Now that water levels are low in the country’s reservoirs, generation has been erratic – and power has been expensive, he added.

“We need to increase gas-fired generation to stabilize the spot electricity price,” Fróes continued, adding that the price in Brazil has even approached $300 per megawatt-hour (MWh), or 30 cents per kilowatt-hour (kWh). By comparison, the average retail price of electricity for residential, commercial and industrial customers in the United States – which boasts a more diverse array of fuels for power generation – was slightly less than 11 cents per kWh in September 2014.

“We don’t have another fuel with a low price,” said Fróes. “We need to increase our gas generation to stabilize the spot electricity price.”

To be sure, Brazil is adding new gas-fired power plants. Although the country produces natural gas, much of it associated gas from offshore oil production, it does not currently produce enough gas to satisfy all of its growing domestic demand.

It is far too soon to tell whether onshore Brazil could hold a bounty of recoverable tight oil and shale gas akin to what North American operations have managed to exploit, said Rob Clarke, Houston-based manager of unconventional oil and gas, with Wood Mackenzie. 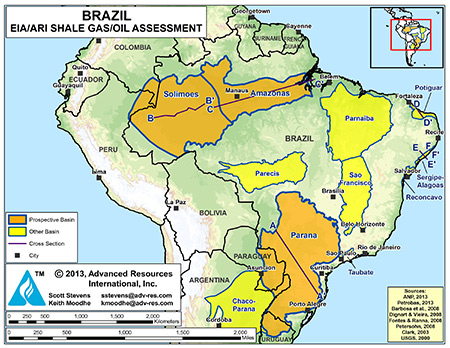 “We’ve seen some estimates to indicate around 100 billion cubic feet per section of in-place resource, but the important thing to note is that it has not been technically proven yet,” he said. “For now, no supply comparisons should really be made to assets like the Marcellus or Eagle Ford.”

“A few big companies – Shell and Petrobras, for example – hold licenses and have exploration plans, but no operator has committed to more than a handful of wells,” he noted.

Evaluations of Brazil’s unconventional hydrocarbons are limited, but a 2013 U.S. Energy Information Administration study conducted by Advanced Resources International, Inc. estimates that three of the country’s onshore sedimentary basins – the Paraná, Solimões and Amazonas – contain a total of 5.4 billion barrels and 245 trillion cubic feet (Tcf) of technically recoverable shale oil and shale gas, respectively. Other sedimentary basins including the Parnaiba, Parecis, Reconcavo and Sao Francisco may hold nearly 300 Tcf of additional shale gas, according to a report from The Oxford Institute for Energy Studies.

“Brazil has more than 5 million square kilometers (1.93 million square miles) of onshore sedimentary area,” Petersohn noted. “Some like the Recôncavo, Potiguar (onshore) and Espírito Santo (onshore) basins are areas explored for a long time. Recôncavo Basin cumulative production exceeds 1 billion barrels. However, there are still huge areas to explore, generating a lot of investment opportunities, because most of the onshore basins have evidence of hydrocarbon generation.”

ANP has for years been actively working to collect better geological and geophysical data about the frontier areas, added Petersohn.

“In 2007, [ANP] implemented its Multi-Year Plan for Studying Geology and Geophysics, which aimed data acquisition in the Brazilian sedimentary frontier basins,” she said. “This program aims to increase the geological knowledge and the petroleum potential of little-known basins and seeks to attract investments in these areas, especially for large onshore basins. Since the program was implemented, ANP has invested nearly $600 million.”

Encouraging operating companies to invest in Brazil’s onshore and get a better idea of unconventional reserves in the country’s sedimentary basins will demand a major change in the government’s fiscal and regulatory policies that go beyond a traditional offshore-centric mindset, continued Clarke.

A November 2013 auction of 240 onshore gas blocks by regulator ANP resulted in only 72 blocks actually being awarded, and 49 of these blocks went to national oil and gas company Petrobras, according to The Oxford Institute for Energy Studies report. Moreover, only 12 of the 21 companies that pre-qualified to bid actually participated in the auction and only four of the 12 companies were from outside Brazil (none from the United States), the report also stated.

“The regulatory environment is not set up to manage massive shale projects,” Clarke said. Brazil’s government “obviously…would like to see investment (by foreign companies), but the focus has been on managing the country’s offshore potential first.”

“Taxes are too high for shale projects, and exploration programs will move forward slowly,” he said. “Also, lots of associated gas should find its way onshore over the coming years. Shale gas will face stiff competition.”

Fróes concurs with Clarke that the government needs to make a more concerted effort to spur shale development in Brazil.

“We need the political desire,” he concluded. “The government needs to look for companies with the technology to really invest, to exploit the gas. In my opinion, we don’t have companies with the know-how and financial capacity to invest. It isn’t an easy issue.”