Spun out from the Massachusetts Institute of Technology (MIT) 18 months ago, Open Water Power is seeking oil and gas industry partners to test its aluminum-water platform technology in the offshore oil and gas environment. Company officials told attendees at the Oil and Gas Innovation Summit in Houston in late April that their technology can expand by a factor of 10 the distance at which AUVs can operate, and can help the oil and gas industry cut costs and improve safety and efficiency as they seek to tap the world’s remaining hydrocarbon resources, much of which lies far offshore or under the Arctic ice.

Typically, the more energy that is stored in a battery, the more dangerous the battery is. Open Water’s technology involves simple chemistry that proves an exception to this rule, Tom Milnes, CEO of the Somerville, Mass.-based company, told Rigzone in an interview.

The quest to harness the power of aluminum has taken place for a number of years. Aluminum is typically quite inert – used in soda and drink cans because it doesn’t react with liquid – because it forms an oxide layer so strong that it prevents aluminum from corroding for decades. By taking the fundamental aluminum-water reaction and breaking it in half – so that one half of the reaction occurs on one electrode and the other half of the reaction occurs on the other electrode – a battery or fuel cell is made, allowing for direct energy generation from aluminum, Milnes said. Open Water’s system is based on a water-activated aluminum alloy coupled with tailored electrolytes to ensure high power output relative to what can be gained with regular water, while maintaining high efficiency and long endurance. 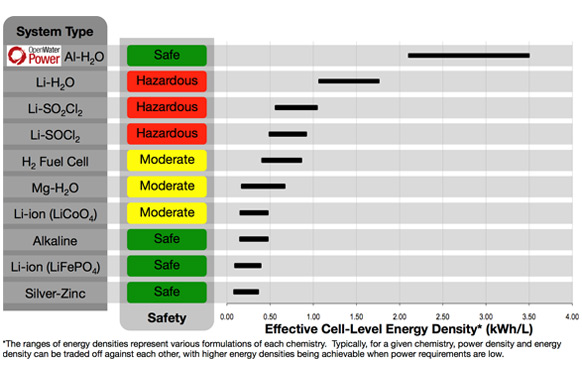 The research to develop this technology came out of a hybrid class-research project between MIT and Lincoln Laboratory, said Milnes, who served as a teaching assistant for the class. The project was funded by the U.S. Navy, Air Force and Lincoln Lab. In the class, students were tasked with finding a way to store more energy underwater for use in AUVs, or unmanned underwater vehicles (UUV). Three approaches were studied in the class: aluminum as a heat source, aluminum as a hydrogen source, and direct electricity generation from the aluminum water reaction. Open Water is seeking to commercialize the third approach because of its many advantages over the other two; the first two systems were left behind at MIT so students could continue using them as class projects for educational purposes.

The traditional method of powering UUVs with lithium-ion batteries has presented limitations in terms of the range and time a UUV can spend offshore. Lithium-ion batteries can become highly reactive when mistreated, and pose the danger of explosion to vessels and rigs. UUVs also can’t currently be used for much without the help of an expensive manned service support vessels, because of lithium batteries’ short lifespan, Milnes said. Open Water’s technology would reduce or remove the need for the support vessel, resulting in a reduction in operational costs as well as increased access to remote resources.

The first big challenge for getting a system like Open Water’s to work was how to alloy aluminum with other metals to make it water reactive. Once that what accomplished, researchers sought through a number of different methods to use the reaction. Initially the reaction was used to generate heat to drive a thermal cycle. These projects largely failed because the various thermal approaches tried were limited by the boiling point of water, a large balance-of-plant that didn’t scale well to smaller sizes, and the incomplete consumption of the aluminum fuels. Previous attempts to use aluminum power failed because the material was so reactive it was dangerous – fine aluminum powder can combust spontaneously when it encounters air, Milnes noted.

Given that most major technical problems for harnessing aluminum power have been solved, Milnes said the company’s founders stood on the shoulders of giants and were in the right place at the right time with their technology breakthrough.

In testing conducted by the U.S. Navy on the risks of explosions of underwater power sources, Open Water’s cells were essentially completely inert across a range of hostile environmental conditions that would make lithium-ion batteries go critical and catch fire or explode, Milnes said. The U.S. Navy Naval Air Systems Command has given the company $450,000 in development funding. Finding a better way to power UUVs is something that the U.S. military has been interested in for some time. Milnes estimates that the U.S. Department of Defense’s (DoD) has spent around $2 billion on underwater power projects over the past few decades.

The technology’s application for UUV power has applications not only for the military, but the offshore oil and gas industry. A case study for the Gulf of Mexico indicates that using aluminum-powered UUVs for inspection operations can reduce costs by replacing pricier service vessels. Many regular missions don’t require intervention, for example sending a camera or sensor down to a pipeline to check for leaks. An aluminum-powered UUV also would have a greater out-and-back range; the company has placed a conservative estimate on the range of 750 nautical miles. 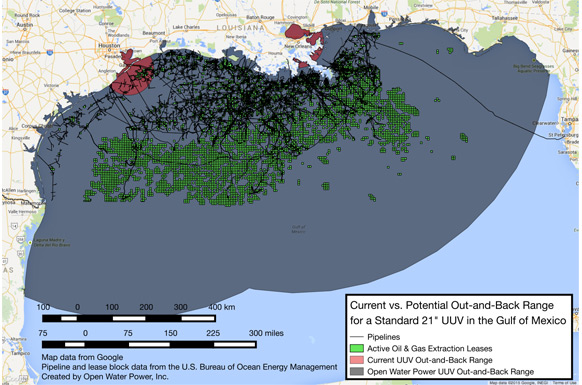 “Our technology, for the first time ever, allows vessels to be out at sea 10 times longer than current batteries allow,” said Milnes. “All of the sudden, you can literally cover every ocean-floor asset in the Gulf of Mexico with nothing more than a dock and a UUV.”

Milnes sees value for the company’s technology in a time of rising extraction costs in oil and gas, noting that the ability to cut costs will be a major factor in being competitive in the space. Open Water’s technology can reduce operational costs for common and repetitive tasks. The technology is also safe compared to lithium ion batteries and is non-toxic.

The company’s technology is suited for work in deepwater – in fact, the technology would work even better at depth. Arctic exploration and production also presents another opportunity for Open Water’s technology, which works even in cold waters.

“Many places where [oil and gas companies] want to explore are under ice, and most drones today literally don’t have the capacity to go there and back. Our technology removes that limitation.”

Milnes said that Open Water really expects this technology “to be transformational for underwater power,” and sees potential for Open Water’s technology to be used in place of lithium ion batteries on a widespread basis.

Unlike lithium ion batteries, Open Water’s power source wouldn’t have to be recharged after sitting on a shelf for an extended period of time. Open Water is also able to keep costs down because of the commodity metals and plastic used, abundance of fuel source, and lack of designer chemicals. Unlike the complex and expensive “Gigafactory” required to manufacture Tesla’s lithium ion batteries – the construction for which started last fall east of Reno, Nevada and is expected to product 500,000 battery packs a year, mostly for use in Tesla’s mass-market electric car – Open Water’s cells can be manufactured in a common machine shop.

The company is in conversations with several energy venture capital funds, and expects first production for operations 12 months from now. Ideally, the company would like the first project to be a joint venture with a large industry player, exchanging funding for exclusivity in the partner’s specific field of use.

Open Water is also working with two large oil and gas infrastructure companies about providing power skids that can be sunk to the ocean floor to provide power for drilling and wellhead maintenance operations.

“One of the major limitations of previous technology was that the power level was too low to support things like drilling or propulsion or opening and closing large valves quickly.”

The skids could provide 10 times as much energy available in a single skid, creating significant operational savings and operational abilities, Milnes said.

The company’s technology also could extend the life of ocean-floor sensors by a factor of 10, Milnes said. 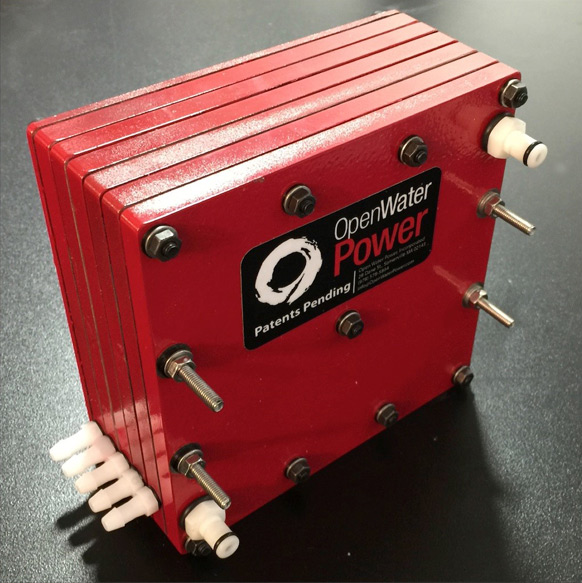 The global AUV fleet is expected to expand by 42 percent to 825 units by 2018, led by strong military sector demand, according to a 2014 report by consultancy Douglas-Westwood. Other industry estimates project even larger growth. Military and scientific research have dominated global demand for AUVs to date. However, the highest growth is expected to come from a small base in the commercial sector, more than doubling its proportion of active units from 2014 to 2018 from 3 to 8 percent.

“Key developments have taken place in areas such as sensing, battery endurance and tracking stability, which allow a wide range of applications to emerge in the offshore oil and gas industry in life-of-field, pipeline inspections and rig moves and in civil hydrography, in addition to existing work in site and pipeline route surveys,” said report editor Murray Dormer in an April 1, 2014 press statement.

North America will continue to dominate global AUV expenditure, mainly on military unmanned technology, though the region’s market share is expected to decline from 64 percent in 2014 to 60 percent by 2018. Africa and Latin America are set to experience the highest growth in AUV expenditure, driven by deepwater oil and gas activities in pre-salt areas. Demand in Asia will be varied with research activities in Japan, deepwater expenditure in India, Indonesia and Malaysia and military investment in China.